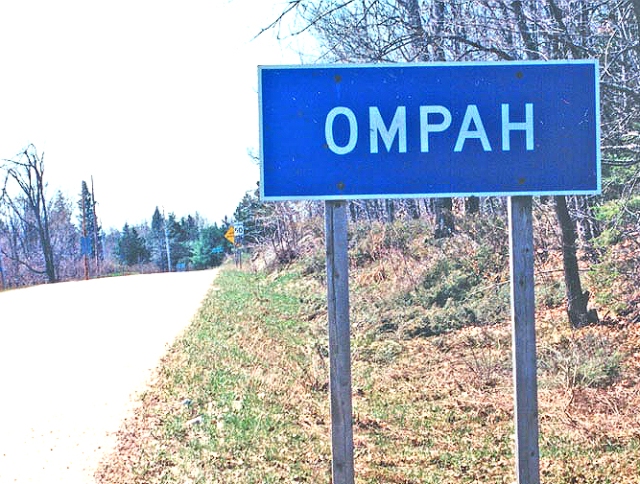 Been workin’ real hard, and we need a little break,

Headin’ for the party up at Palmerston Lake

Grab a bottle, twist the cap, and pass it around,

Swayin’ with my baby to the country sounds,

Music’s loud, fool around, go for a romp,

This is how we do it at the Ompah Stomp”

It was late August, 1978, that we heard about a music festival, to be held over the Labour Day weekend, in Ompah.  This was going to be a back-roads tour, to end all back-roads tours – an outdoor party with live music, and we couldn’t wait!

The Village of Ompah

In those days, Ompah was a tiny, quiet, village.  The most popular place in Ompah, was the Trout Lake Hotel, owned by Wayne Kearney.

The building was originally a private residence; over 150 years old, in fact it was the oldest building in Ompah. Over the years, the residence became a popular local bar. The old timers around there say that they began serving liquor there in 1904.  It was the first licensed establishment in Eastern Ontario, and the locals also claimed that it was one of the first bars in the province.

The hotel was rumoured to have been the setting for some famous and infamous barroom brawls too, but we won’t get into that. The busiest times were in the summer. During the year, there were quiet times, but the seasonal visitors, mostly summer fishing enthusiasts, and the winter snowmobiling patrons, kept it fairly busy.

We jammed as many young people that could fit, into one of my friend’s parent’s cars, and off we headed to Ompah.  We drove up the Third Line, and turned onto Cameron Side Road, past Calvin Church, over the railroad tracks, and onto Hwy 7. We turned onto the Elphin Maberly Road, and continued onto Hwy 509, then Lake Road, and Lafolia Lane.  We parked, and got out of the car. The Stomp grounds were beautiful, green, and lush, with tall, majestic trees, situated on a hill, overlooking scenic Palmerston Lake.

That first Ompah Stomp, was held on September 3, 1978, and their special guests were Max Keeping, of CJOH TV, and Doug Anderson of CKBY FM.  There was a step dancing contest, held at about 8 p.m., followed by old fashioned round and square dancing.  The musical guest artists that year were Sneezy Waters, Mike O’Reilly, and Wayne Rostad.

Over the years, we grew to believe, that this annual country music festival, was our own little ‘Woodstock’.  The Ompah Stomp grew, in leaps and bounds, as people heard about it, and wanted to experience the live music, and party atmosphere.

That first year, in 1978, the organizers had anticipated about 200 people attending, and the total numbers were closer to 3,500.  The second year,  the crowds grew to 5,000 and the third year, saw the attendance numbers rise to 6,500. 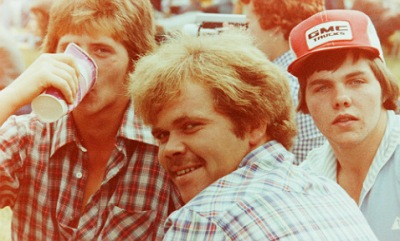 Local dancers – showing off their moves

Some of the musical acts that performed at the Stomp were:  Neville ‘Nev’ Wells, , the Family Brown, Jack McRae and the King of Clubs, The Prescott Brothers, Hugh Scott, Ron McMunn and Carbine, Steve Glenn, David Thompson, Fred Dixon, Lynn and Chris, Lloyd Wilson, Dallas Harms, Ted Daigle, C-Weed Band, Terry Carisse and many others. 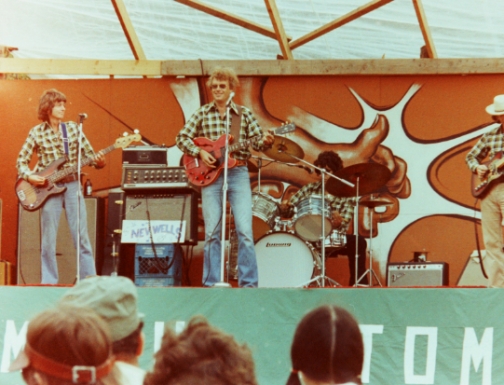 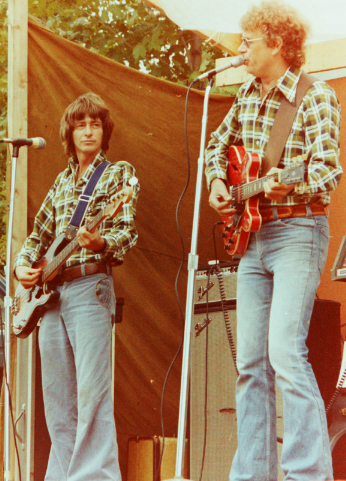 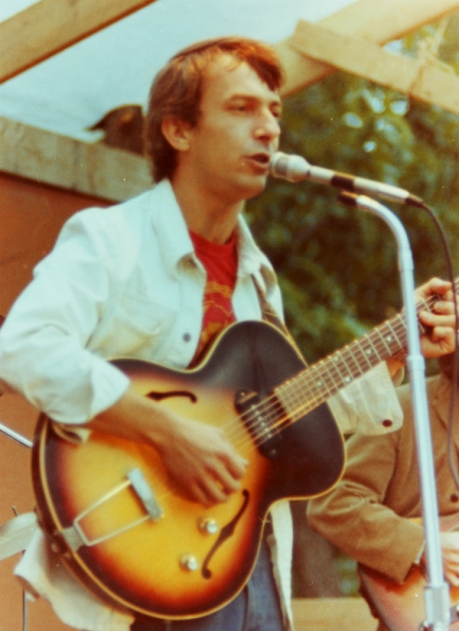 A poem written by Kathy Norwood, about the ‘Stomp’, printed in March 1980 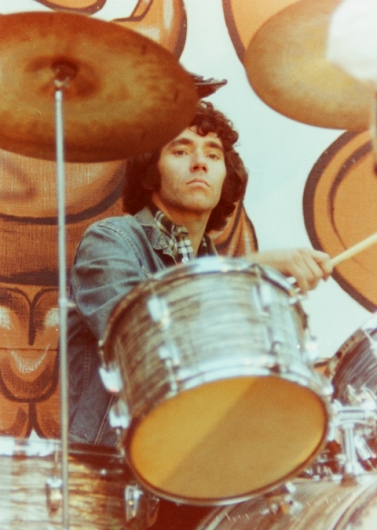 The Crowds Grew Larger Each Year

The Ompah Stomp became a much-anticipated annual event, and was featured in the local newspapers. 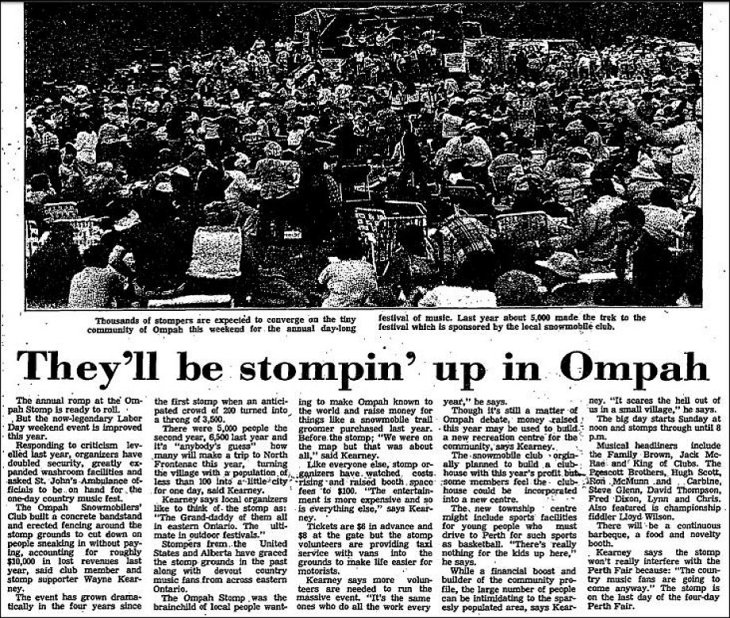 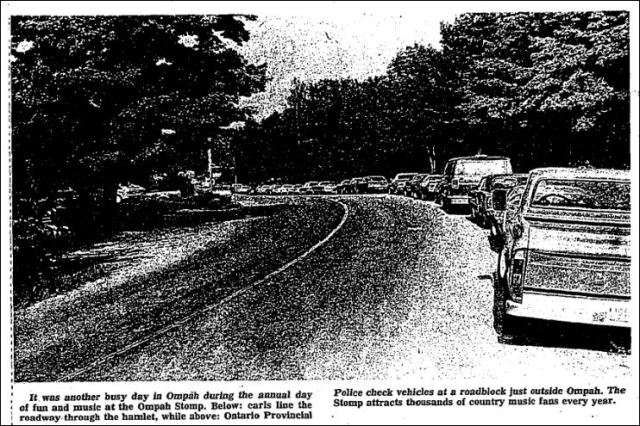 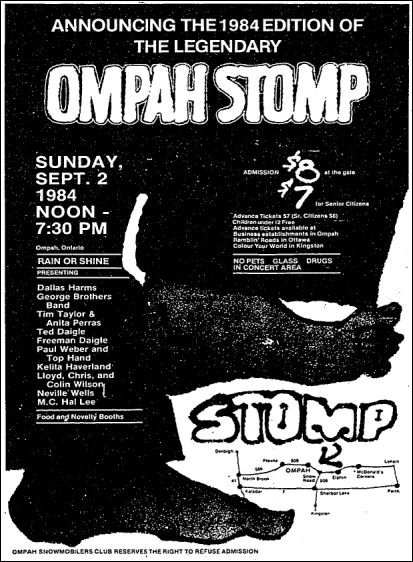 Liquor and beer flowed freely from coolers and wine-skins, and the lineup at the washroom facilities was unbelievably long, but everyone enjoyed themselves just the same.  It was wonderful to have a music festival so close to us.  In those days, if we wanted to hear live music of that caliber, we’d have to travel to Ottawa or Kingston, so it was great to have the Ompah Stomp so nearby.

As the years passed by, the Ompah Stomp had a reputation as a wild party, and the local police adopted stricter controls for the festival.

The Stomp carried on for many years, after those first few annual celebrations. Visitors traveled from the U.S., and from neighbouring provinces as well.

Labour Day weekend was one of the busiest and most exciting times for us, in the area, because of the Ompah Stomp. 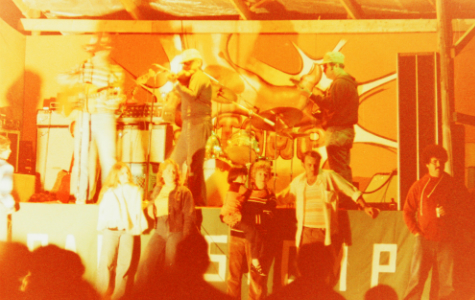 Looking back, it’s difficult to imagine that a tiny village of around 100 people, and their local snowmobile club, could create a music festival, attracting thousands of people, from all around.

The Ompah Stomp was a shining example of the spirit of the people in rural Eastern Ontario, and what they could accomplish.  They never faltered in their belief that they could succeed, or lacked the confidence to organize a music festival just because they were a handful of folks, from a tiny village.

The Ompah Stomp became a metaphor, an example for all of us, that it only takes a few people who believe strongly in something to make a difference.  It sure made a difference for us kids in the country, who were always looking for a little excitement.

I will always remember those special times at the Ompah Stomp, and how they made our last weekend each summer something we’d all remember fondly for years to come.

Many thanks to Don White and Neville Wells for providing the names of the musicians in the photos!

Neville Wells, a founding father of the ‘Ompah Stomp’, was inducted into the Ottawa Valley County Music Hall of Fame, in 1994.

… Search for your ancestor in the 1901 Census of Canada:

Discover the ‘glory days’ of the Ompah Stomp, how it began, who was there, the unforgettable parties, the music, and more:

“The Legendary Ompah Stomp”, in the book –

Available at The Book Nook and Other Treasures, and The Bookworm, in Perth, Mill Street Books in Almonte,  or online at  http://www.staffordwilson.com

For more information on the history of Ompah and some of its founding families: