It was her father, James Haggis, who started the candy business in Perth, back in 1926, but it will likely be Sophia, who will always be remembered fondly, as the ‘Candy Lady’. 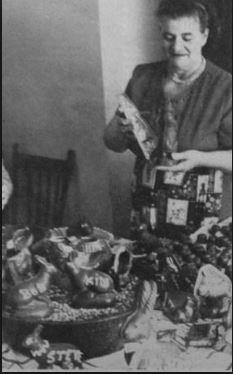 Sophia used the original equipment, passed down to her, from her father, like the big copper pots for melting rich, velvety, chocolate, and buttery peanut brittle. 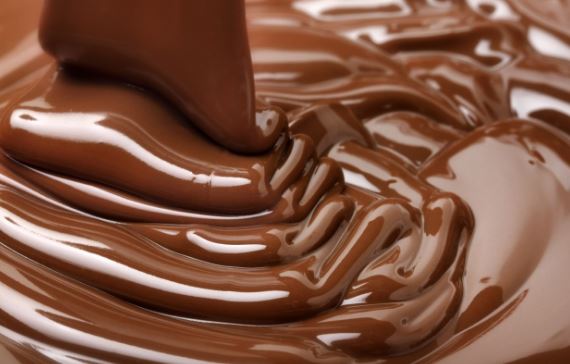 Each year at Easter, Sophia made delicious chocolate bunnies and eggs, and would offer to personalize them with any name.  She used a stiff white icing, and piped on the names by hand, as her eager audiences waited for their special egg to be completed. 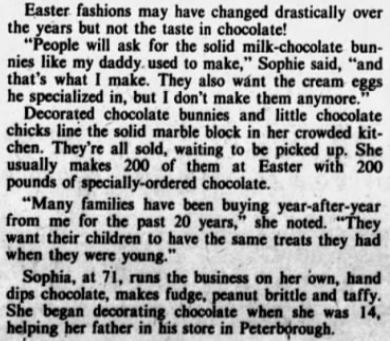 Haggis Candy was located on the main street of Perth, at 60 Gore St. E.

A very special time of year for Haggis Candy was Christmas, and Sophia decorated her store windows with her giant candy-canes, some of them almost six feet tall! 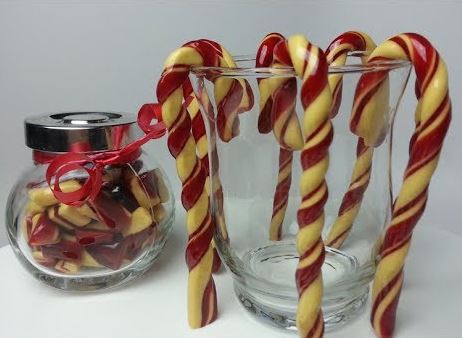 One of Sophia’s specialties was her Horehound candy.  It had a very distinctive flavour, and some said that it was a good remedy for sore throats, and congestion.  Most of her customers just liked its unique taste.  People came from miles around to buy her Horehound.

Sophia made her candy from the Horehound Plant.  The plants are picked, dried, and steeped with boiling water.  The liquid is strained, sugar is added and brought to a boil, then cooled on a marble slab.  The finished candies are cut into squares, and rolled in powdered sugar.

Another customer favourite was Haggis’ taffy.   Sophia used the original steel hooks to pull her taffy, to just the right consistency. 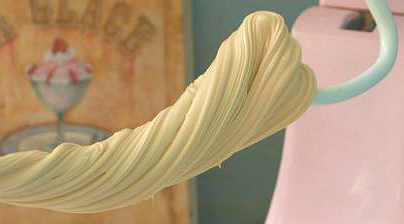 …..and the finished taffy, ready to enjoy!

She used the marble slabs, passed down from her father, to cool her fudge quickly, so that it could be cut into squares. 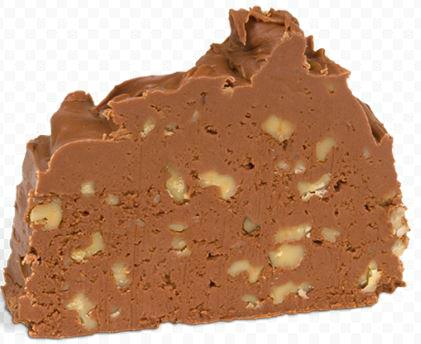 Sophia had a quick smile, and a warm personality.  She loved following in the traditions of her father, and most of all loved to see the smiles on her customer’s faces when they tasted her delicious treats. 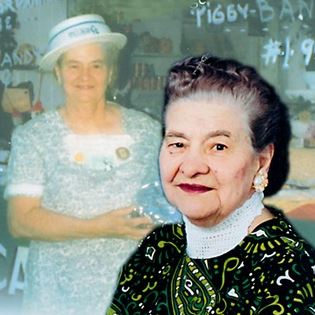 Haggis’ Candy store was where you’d often find my friends and I, after leaving Perth High School in the late afternoon.  My personal favourites were Sophia’s milk chocolate peanut clusters, made with real Spanish peanuts!  Sophia would place a few in a small, brown-paper bag, weigh them, and hand them to me with a smile.  Sometimes I would bring them outside, walk down Gore Street, sit on the bridge, and watch the world go by, as I savoured my chocolate treats! 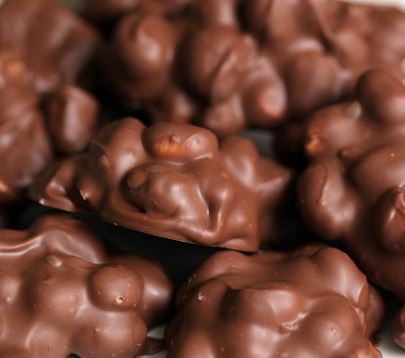 On hot, muggy, summer days, Sophia made the most delicious banana splits, and often tourists and locals alike, would stop by her store to sample some of her rich, creamy, creations. 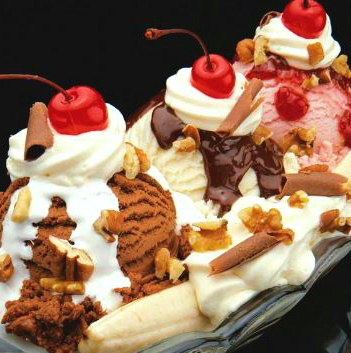 In 1988, at the age of 77, Sophia retired from the candy business.  She kept active in her later years, and continued to play the piano, as she had often done, at various events in Perth, over the years.

Sophia eventually left Perth, and moved to Kingston.  She lived a long life, and there were many very happy birthdays over the years!

Sophia had a wonderful milestone birthday, when she celebrated her 100th!  She still had her kind smile, and bright eyes.

After a long, happy, life, Sophia passed away at Providence Manor in Kingston, on Sunday, November 4th, 2012, at the age of 101.

She may be gone, but never forgotten, and many of us will treasure the memories of our childhood visits to Haggis’ Candy store.

She will always be fondly remembered as the ‘Candy Lady of Perth’.

Read the fascinating story of Sophia Haggis Nee in “Lanark County Calling: All Roads Lead Home”.  Learn about Sophia’s childhood in Peterborough, her grandfather the Lockmaster on the Trent Canal, her grandmother Sarah, the published Poet, and find out about her great uncle Samuel Lowry and his scandalous court case.  Read about her days as a teenager at the Perth High School, and her chance meeting with the influential Mrs. Jack Stewart. Learn about Sophia’s most unusual trail-blazing career in Kingston, Ontario, before moving back to Perth to take over her ailing father’s business.  Read memories of the happy days at the candy store, the customers, the ‘regulars’, and some surprising things about this much-loved lady and well-respected woman entrepreneur in the town of Perth, Ontario.