‘The Corners’ was a phrase heard often in our small community.  The Corners referred to DeWitt’s Corners, a mile or so west of our farm, and was located at the crossroads of the Third Line, Munro’s Side road and Cameron’s Side road.

The early settlers in Bathurst Township were keen to have their own church instead of driving to St. John’s Church in Perth, or St. Bridget’s Church in Stanleyville.  Roads were treacherous at times in the winter, with deep snow, sometimes freezing rain, or both.  John DeWitt, son of a pioneer settler, and his wife Mary Neil knew there was a need for a Roman Catholic Church to serve the growing community. Hoping to improve the situation, they made a promise to donate the land to build a church.

The construction progressed quickly, and the first mass was held on November 23, 1889.  The church was packed that day, and this stately building has served generations of families around DeWitt’s Corners and the area for over 125 years and counting.

A bike ride down the Third Line often meant that my friends and I would gather around the millstone at Cavanagh’s general store.  It was a central meeting place where we could sit and talk.  Between us, we could usually scrounge together enough pocket change to buy some penny-candy at the store.

DeWitt’s Corners was a busy place in the 1960s and 1970s, with cars stopping at Cavanagh’s store for gas and groceries, or zooming up the Third Line toward Christie Lake.  Christie Lake was a tourist destination with accommodations of all kinds for seasonal visitors.  Norvic Lodge, Arliedale Lodge, and Jordan’s Cottages, were some of the busiest places in the summer months. 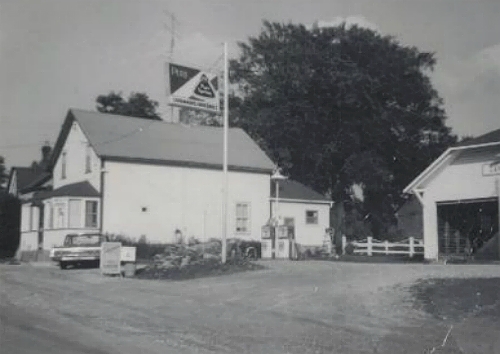 Across the Third Line from Cavanagh’s store was the old Bathurst cheese factory.  The factory produced cheese until about 1954 and then ceased operations as other larger factories began to edge out the smaller producers.

Photo: old Bathurst cheese factory in the background with Helen and Jim Cavanagh and Shep.

Not far from the ‘Corners’, just up Cameron’s Side Road was the little white school house – S.S. # 4 Bathurst, where many of the members of our family attended school.  Mary Jordan taught all eight grades, keeping order in a compact classroom, heated with a wood stove, and bursting with energetic farm kids.

When Mary Jordan wasn’t busy teaching eight different grades, she coached the DeWitt’s Corners softball team.  Both of my sisters Judy and, Jackie, played on the championship team in 1959. My brother Roger was on the team in 1964. 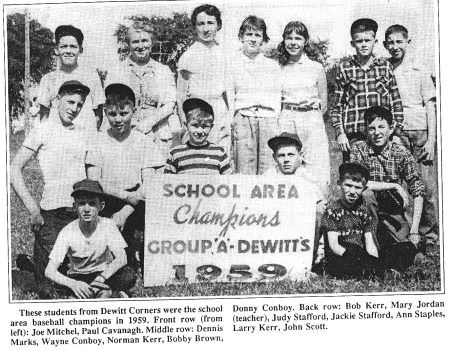 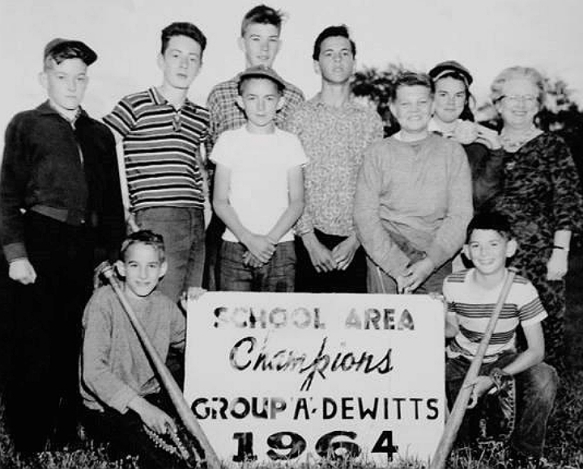 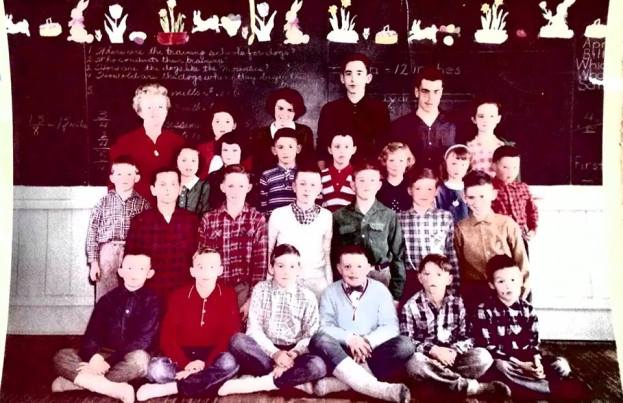 There always seemed to be a sense of history in DeWitt’s Corners, and intriguing tales of the early settlers were told and re-told around that small hamlet. Most of us in the community were aware that Helen Cavanagh was a member of the DeWitt family, but many may not have realized how far back her roots stretched to the earliest settlers.

The store opened on June 3, 1947 – carrying a full line of groceries, confectionaries, and tobacco products. Along with groceries and everyday sundries, Cavanagh’s store also sold gas supplied by Esso, a branch of Imperial Oil. Locals and cottagers, along with campers at nearby Christie Lake, were all pleased to hear that there would be a general store in the area, and they would no longer have to drive to Perth to pick up daily necessities.

Jim and Helen Cavanagh operated the popular neighbourhood store for nearly four decades until they retired in 1985.

Many members of this proud community played a part, and their descendants carry with them the legacy of this historical settlement in Lanark County:

For more information about the history of DeWitt’s Corners, and the people who settled in the community, you can read the full version of the story in “Lanark County Classics: A Treasury of Tales from Another Time”

13 comments on “Meet Me in DeWitt’s Corners”