There was nothing fancy about the rickety old wooden bird feeder in the orchard behind the house. Our father was not going to win any awards for his design, that’s for sure. The bird feeder was constructed of five short pieces of wood, cut from an old weathered plank, and consisted of a floor, a roof, and three side walls. The pieces were nailed together, and mounted on a two by four, hammered into the ground, about twenty feet from the back kitchen window.

It was Mother who requested that the feeder be built one winter. It had been a brutally cold January, and snowy too. The winds from the north seemed particularly harsh that year, and it had been weeks since I’d ventured up the Third Line to visit my friends at DeWitt’s Corners. I’d been outside a few times helping with the shoveling, and even slid down our neighbour Chris Perkins’ hill on my toboggan a couple of times, but it was just too cold to stay outside for very long.

Because of the heavy snow and frigid temperatures, Mother had been very concerned that the birds wouldn’t be able to find food and would perish. Once Dad had finished putting up the bird feeder, Mother went to straight to work preparing something she thought would be hearty and filling for her feathered friends.

She brought out the heavy, well-worn, cast iron frying pan from under the sink, went straight to the old refrigerator, and picked up her bowl of bacon drippings. Every time Mother cooked bacon she poured the leftover drippings into a melamine bowl, and stored it in the fridge. She used the drippings to add flavour whenever she fried eggs, and for frying onions to have as a side dish with supper. 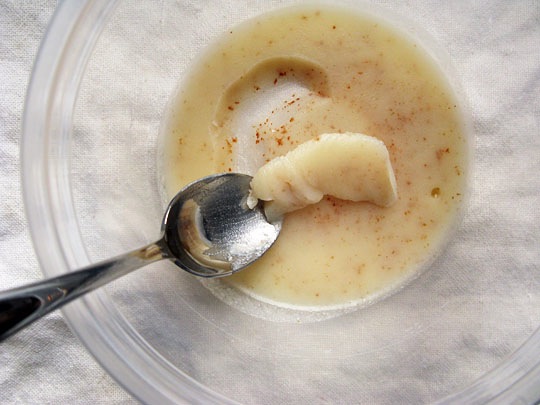 While the bacon drippings were heating up in the pan, Mother brought out a heavy plastic bag where she stored old crusts of bread, and she began to break them into crumbs. She rubbed them against the palm of her hand over a mixing bowl, until they were in fine pieces, like the crumbs for Christmas stuffing. Next, she brought the bowl of crumbs over to the frying pan and poured them in, a bit at a time, and stirred them with a wooden spoon, until they were coated in bacon drippings.

She scraped the crumbs back into the mixing bowl, and set it on the kitchen table to cool, while she put on her boots and coat. She grabbed the bowl and headed out the door into the back porch, and out to the new feeder in the orchard. Dad might not have built a fancy-looking feeder, but he had placed it at just the right height so that Mother could easily lay her bacon-coated crumbs inside.

Mother came back in the kitchen, took off her coat and boots, and we waited patiently by the window. I pushed back the curtain, and pulled up a couple of kitchen chairs so we could watch. By this time Dad had put away his tools, had come in from the garage, and was making himself a cup of coffee. He warned me not to make any sudden movements in front of the window, or I would scare the birds away, so I sat there quietly and we waited.

Less than fifteen minutes passed when we saw our first ‘customer’. We were all excited, and even Dad, who hadn’t seemed particularly interested at first, was over by the window to watch the show. The first bird at the feeder was a blue jay. He had a little blue ‘hat’ and wings, and a big round white belly. There was a blue and white pattern on his back and he had a lovely, long tail with many different shades of blue all the way to the tip. His eyes and his beak were shiny and black, and he pecked away eagerly at the crumbs in the feeder for several minutes.

He continued to peck at the crumbs, looked around nervously, pecked again and then looked straight at us with his big black eyes as if to say ‘thank-you’, then he flew away through the orchard and over the back field, heading toward the train tracks.

The bird feeder was a success! Dad was smiling, knowing that his efforts had been worthwhile. Mother was pleased that her very first ‘customer’ had enjoyed his meal, and hopefully would bring his friends back to dine as well, and keep in good health during the cold spell. 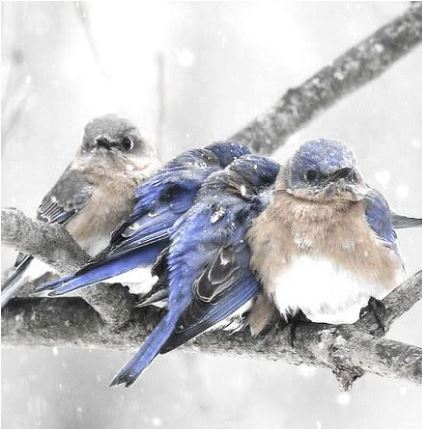 Mother’s birdfeeder would remain in the old orchard for many decades. The construction was basic, the feed was always the same – bacon grease and breadcrumbs, and over the years thousands of birds would dine at the feeder while we watched from the kitchen window. Blue Jays were always her favourites, although I saw a few handsome red Cardinals and many Black-Capped Chickadees over the years as well. 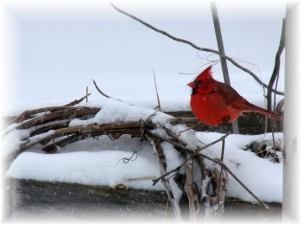 On these harsh, frigid, January days, when the winds are relentless, and the snow piles up around us, I think of our small feathered friends back on the Third Line. I wonder if the old feeder is still standing in the orchard, and if anyone thinks to put out a few crumbs and some drippings for our beautiful, hungry, winter birds. In the stark, white landscape they provided a welcome splash of colour, and their songs gave us hope through the long, silent winter. 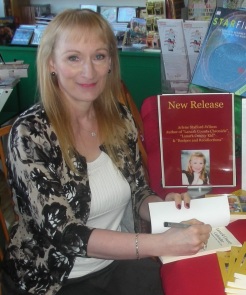 is an excerpt from  “Lanark County Calendar: Four Seasons on the Third Line”