December 1st was THE day. We waited patiently all through November, asking again and again, if we could please put up just one or two decorations, but the answer was always a firm ‘No!’. It didn’t seem fair.  The “Sears Wish Book” had been delivered to our mailbox two months before, and was dog-eared, with page corners folded down, and multiple selections circled in black marker.

We gently reminded Mother that many of the merchants in Perth, like the I.G.A. on Wilson Street were already advertising their tasty Christmas specials, and had been selling poinsettia plants for weeks now…….but she just wouldn’t budge. 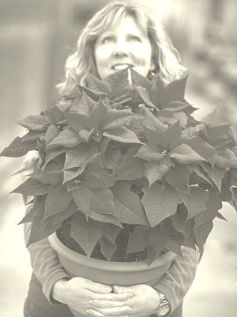 Finally, on December 1st each year the ‘Christmas floodgates’ opened wide, and the clock started ticking down to the big day. All of the Christmas cards that Mother had been working on since Hallowe’en were mailed on the first, without fail. 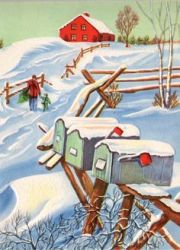 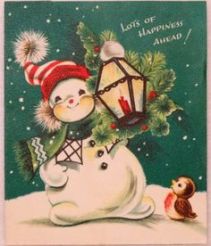 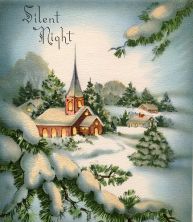 The Christmas lights that Dad had strung so carefully around the spruce tree, beside the old house, were always turned on that first evening in December.

He’d plug them in as soon as the sun began to slide down in the sky, and disappear from view behind the Mitchell’s barn. They were always the most beautiful lights on the Third Line….or at least I thought so.

Long before the lights were lit that evening, the old house was a hive of activity because we were finally allowed to decorate! One of the older kids usually got the job of carrying box after box of decorations and ornaments down the back stairs. The stairs wound down in a curve, and there were little piles of ‘this and that’ stored on the steps, so whoever brought down the glass balls for the tree had to walk down slowly, stepping carefully like a tightrope artist. 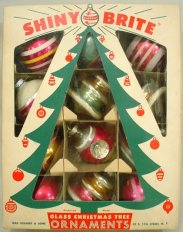 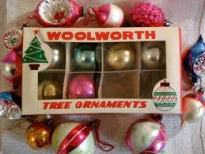 After many trips up and down the back stairs, all of the boxes were assembled in the living room. The first job was unwinding the rolls of red and green crepe paper, twisting them, and draping them from corner to corner in the living room, and hanging the gold paper star right in the center.

The old bone-china Santa Claus figurines were arranged in a row, along the top of our rickety black and white television set, right in front of the tall, Blue Mountain pottery vase.

The next decoration to be displayed was the brass angel chimes. Great Aunt Nellie had sent the chimes as a gift one year, and it required assembly. The brass post held four angels, the base held four small candles, and when the candles were lit the heat rose, the angels spun around, and brushed against the bells, making a gentle chiming sound. 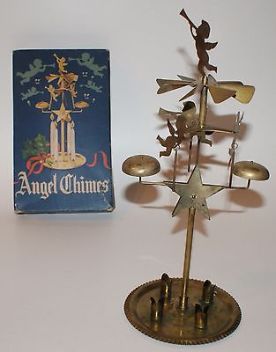 There were other sets of bells to be hung as well, and they were attached with small nails to both our front door, and the hall door. Every time someone opened or closed the doors the bells would sound, reminding us that Christmas was coming. 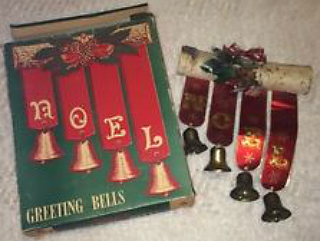 The star of the show came in next –   a spruce tree, cut fresh from the bush, behind the old house. Sometimes there was still snow on the branches, and we’d create a little bit of a mess as we dragged it through the kitchen, into the living room.

Between the melting snow and the needles, something always ended up on Mother’s floor. Once the tree was standing up in the red metal stand, and all of the screws were twisted firmly to hold it in place, we were allowed to begin decorating. 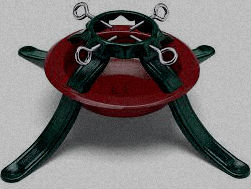 The lights were strung around the tree first, followed by the silver garlands, strings of popcorn, and then the beautiful glass balls.

There were boxes and boxes of delicate, old, glass balls, and they’d been around long before me. Some of them were striped, some were plain, and one or two of them always seemed to get broken each year, no matter how careful we were. Mother would always insist on cleaning up, so that none of us got cut on the glass shards, and she would gingerly sweep up the broken ball into her dustpan, and carry it out to the back porch. 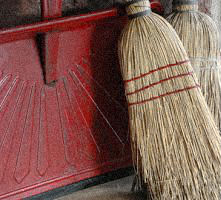 Finally, colourful metal birds with silky tail feathers were clipped onto the tree, one at a time. They always reminded me of the beautiful songbirds that filled our yard with music each summer, and they looked very familiar, like dear old friends, perched on the spruce branches in the living room.

The next ornaments were the ones we’d made ourselves over the years – pine cones with the tips painted white, or small Santas, or paper angels.  Some even looked a little worse for the wear, but they were hung on the tree every year, just the same. The last decoration to be placed on the tree was the tinsel, and it was hung very carefully, strand by strand – not too much so that you couldn’t see the ornaments, and not too little, but just enough to glimmer and shine when the lights on the tree were lit.

Mother often made eggnog while we decorated, and she brought us plates of her homemade cookies while we worked. When we were finally finished we sat back among all of the empty boxes and looked approvingly at our work.

By the end of the day on December 1st each year, the scent of the freshly-cut spruce tree filled the house, and the candles on the angel chimes were lit. The Christmas cards were stacked in the mailbox at the end of our long lane-way, Dad turned on the outside lights, and the big spruce near the front door, adorned with coloured lights glowed softly beside the old house.

December 1st always began and ended the same way each year on the farm. In the morning there was no sign of the season anywhere, and it looked very much like any other winter’s day. By the end of the day however, it looked like a magical, festive, wonderland, both inside and outside, and at our house, it was the day that the Christmas season officially began. 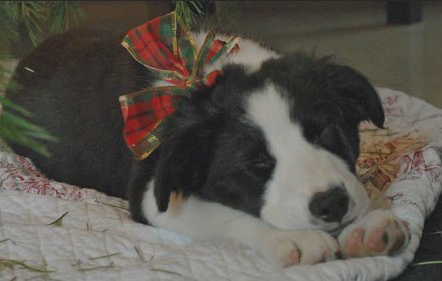 Wishing you and yours, comfort and joy, as we count down the days to Christmas!

a pinch of salt

Whisk egg yolks and sugar together in a small bowl

In a saucepan over medium heat, combine cream, milk, salt, and nutmeg and stir until it reaches a simmer

Stir each spoonful.  Once most of the hot mixture has been added, add the entire mixture back to the saucepan.  Continue cooking and whisking for just another minute or two until it begins to thicken

Remove from the heat and add vanilla.

Store in the fridge for up to one week.

For adults only:  Add ¼ cup rum or whisky after cooling the eggnog 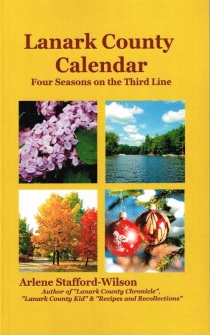 Photo of the IGA  Foodliner, courtesy of ‘Perth Remembered’

7 comments on “Kickoff to a Country Christmas”