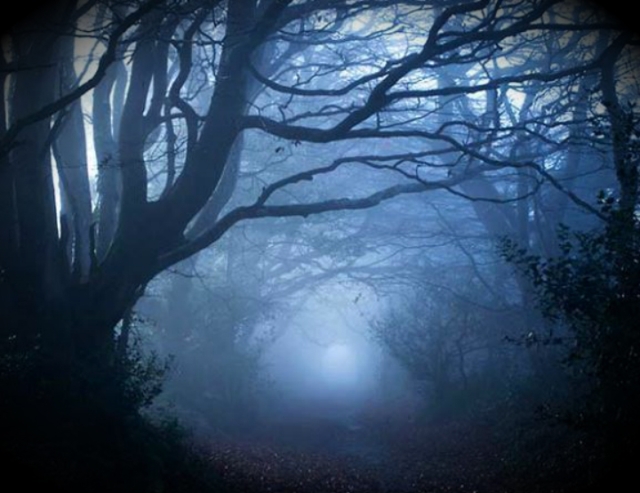 This eerie tale began in the autumn of 1889, on a farm, owned by George Dagg, and his wife, Susan, located in Clarendon, 10 kilometers from Shawville, Quebec.

George and Susan had three children at that time, Eliza, age 4, Mary, age 3, and baby John.  The Dagg family had also taken in a young girl, 11-year old Dinah.  Like many orphans from the U.K. at that time, she was brought to Canada, and these children were often placed in farm homes, where they could help out.

When Dinah was present, there were often unexplained, spontaneous fires — eight occurring in a single day.  Objects  – a water jug, butter tub and wash basin ‘flew’ around the property controlled by an “invisible agency.” Stones were thrown through windows, a harmonica played on its own, and an empty rocking chair, rocked back and forth.

Family members and neighbours heard a deep gruff voice, sounding like an old man, in the house and outdoors,  and the voice answered questions, and was heard by all. 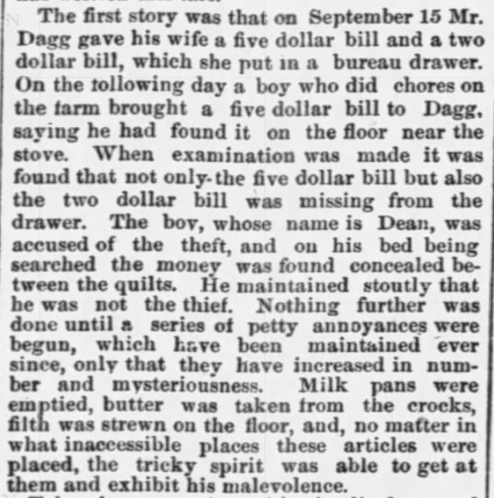 Who Broke the Glass?

The Dagg Family Consulted with The Witch of Plum Hollow

Percy Woodcock, of Brockville, a well-known artist, and student of Psychology, began to investigate the strange occurrences at the Dagg home…..

Was it the farm-hand, Dean?

Some claimed it was Dinah… 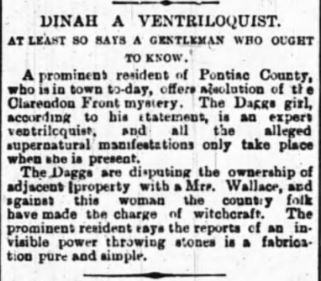 Dinah Burden McLean, the adopted orphan from Scotland, taken in by the kindly Dagg family, was blamed for the disturbances, and eventually was sent away to Fairknowe Home, in Brockville.  Fairknowe Home was an orphanage, and at the time Dinah was sent there, it was called The National Orphan Homes of Scotland, and later the building housed a division of the Brockville Children’s Aid. 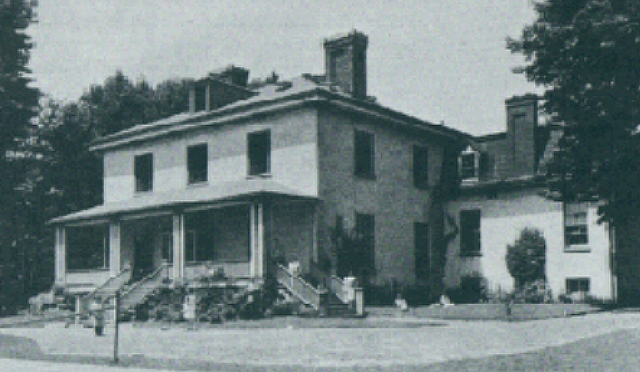 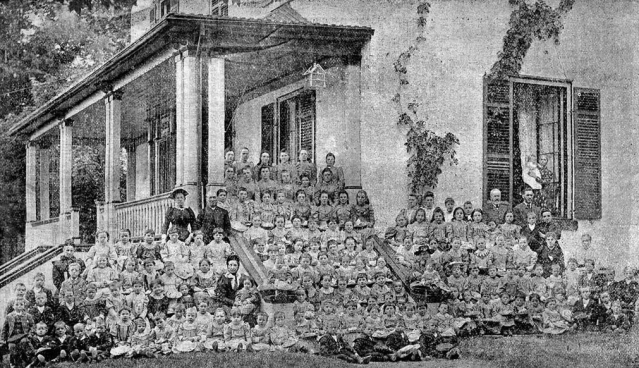 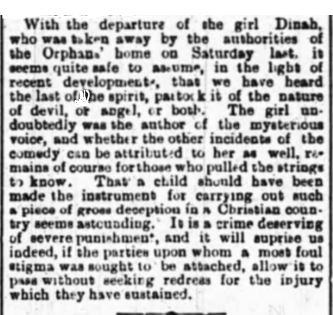 “He claims to be a discarnated being who died twenty years ago, aged eighty years; that he gave his name to Mr. George Dagg and to Mr. Willie Dagg, forbidding them to tell it.”

Seventeen farmers and community leaders, including local politicians and clergymen, signed  witness statements to the unusual sightings, and voices heard at the Dagg farm, in the fall of 1889. 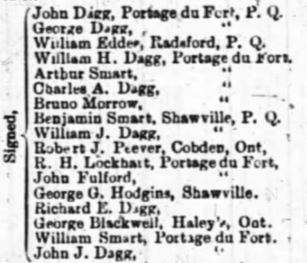 Seventeen people witnessed the disturbances of the Poltergeist, and signed a statement to that effect…

“To whom it may concern:

We, the undersigned, solemnly declare that the following curious proceedings, which began on the 15th day of September, 1889, and are still going on, on the 17th day of November, 1889, in the home of Mr. George Dagg, a farmer living seven miles from Shawville, Clarendon Township, Pontiac County, Province of Quebec, actually occurred as below described.

1st, That fires have broken out spontaneously through the house, as many as eight occurring on one day, six being in the house and two outside; that the window curtains were burned whilst on the windows, this happening in broad daylight whilst the family and neighbours were in the house.

2nd, That stones were thrown by invisible hands through the windows, as many as eight panes of glass being broken; that articles such as waterjug, milk pitcher, a wash basin, cream jug, butter tub and other articles were thrown about the house by the same invisible agency; a jar of water being thrown in the face of Mrs. John Dagg, also in the face of Mrs. George Dagg, whilst they were busy about their household duties, Mrs. George Dagg being alone in the house at the time it was thrown in her face; that a large shelf was heard distinctly to be played and was seen to move across the room on to the floor; immediately after, a rocking chair began rocking furiously. That a washboard was sent flying down the stairs from the garret, no one being in the garret at the time. That when the child Dinah is present, a deep gruff voice like that of an aged man has been heard at various times, both in the house and outdoors, and when asked questions answered so as to be distinctly heard, showing that he is cognizant of all that has taken place, not only in Mr. Dagg’s family but also in the families of the surrounding neighbourhood. That he claims to be a discarnated being who died twenty years ago, aged eighty years; that he gave his name to Mr. George Dagg and to Mr. Willie Dagg, forbidding them to tell it. That this intelligence is able to make himself visible to Dinah, little Mary and Johnnie, who have seen him under different forms at different times, at one time as a tall thin man with a cow’s head, horns and cloven foot, at another time as a big black dog, and finally as a man with a beautiful face and long white hair, dressed in white, wearing a crown with stars in it.

Curiosity-seekers came by the wagon-load, from neighbouring towns and villages, along with the media, to witness the Dagg Poltergeist

The Dagg house, below, as it appeared before the additions 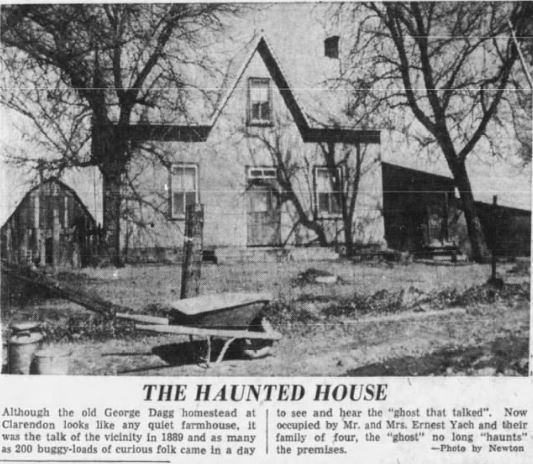 Attested by Scores of Credible Witnesses

“The man left with Dinah, and she was never heard from again….” 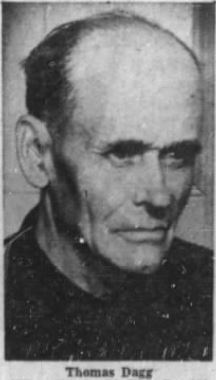 Charlie Harris, of R. R. # 2, Shawville,  was hit on the head by the Poltergeist

Noted by the Lombard family  – a strange sound of crawling and scratching in the attic, solely focused above the original house.

Eliza Jane, age 4, the Dagg’s daughter, died mysteriously, during the time of the poltergeist’s visit.

Grave of Eliza Dagg, daughter of George and Susan Dagg.  She passed away in a mysterious accident, during the time of the poltergeist on the family farm.  (local lore is little Eliza was playing near a cauldron of soap, her clothing caught fire, and she burned to death)

After the disturbances of 1889, the lives of George Dagg and his family returned to normal, for the most part.  George became one of the most prominent farmers in the region, and served as a Councillor for Portage from 1918-1922.  Popular, and well-respected, he ran for Mayor in 1922, and was elected.  He served as Mayor of Portage for 16 years, right up until his death, in 1938. 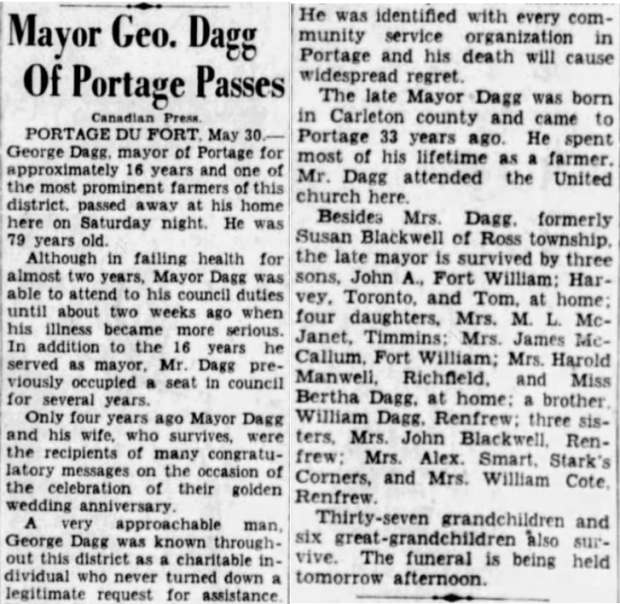 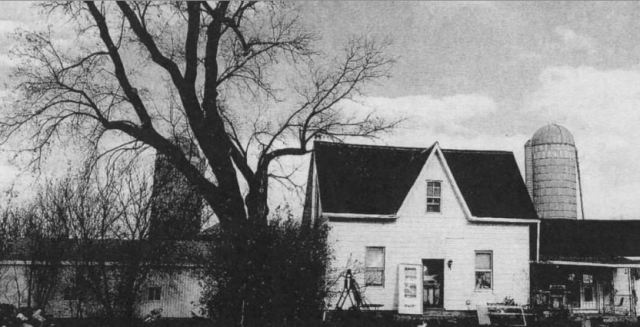 Did it vanish for good, or did it return?

The old-timers say that the poltergeist vanished, and appeared like a streaking flame, as it finally left the Dagg farm, after three long months, of troublesome behavior.

The Dagg House, as it appears today.  Local people and curiosity seekers still drive by this property, and local teens have been known to walk through the yard at night, on a dare.

Would You Dare to Visit at Night?

More on the Dagg Poltergeist:

A movie about the Dagg Poltergeist, was produced by the National Film Board, and the story was published in a book by R.S. Lambert in 1955:

Exploring the Supernatural: The Weird in Canadian Folklore

1955. R.S Lambert’s book Exploring The Supernatural: The Weird In Canadian Folklore was published, which includes a chapter of what took place at the farm in 1889.

The Ghost that Talked

The Dagg poltergeist was the subject of 1957 National Film Board movie, “The Ghost That Talked.”

“In the fall of 1889 a mysterious presence took up residence in the Dagg farmhouse in Pontiac county, Québec. This dramatization based on the first-hand report by Canadian artist Percy Woodcock shows that ghosts and poltergeists are as common in Canada as in the Old World.”

For more information on Fairknowe Home, orphanage in Brockville:  “The Village, A History of Quarriers” , by Anna Magnusson, 1984.