The weather was picture-perfect for the 40th Annual Maple Festival this year in the pretty town of Perth, Ontario.  The bright late-April sun warmed the thousands of residents and visitors who had gathered for this annual rite of spring in Lanark County.  Known as the ‘Maple Syrup Capital of Ontario’, the county of Lanark enjoyed a banner year with an exceptionally lengthy maple harvest. Week after week of cold nights with temperatures dipping below zero, followed by warm afternoons reaching highs in the double digits meant a long and abundant run of sap.  No less than 40 gallons of this sweet, watery fluid are required to produce one solitary gallon of syrup and the task requires patience, care, and an abundance of labour.

The annual festival drew crowds in the thousands for this year’s event.  Partly due to the sunny spring temperatures, but mainly because of the incredibly talented live musical acts, delightfully tempting wares of the local food trucks, as well as arts and crafts vendors, and of course the stars of the show – the Lanark County maple products offered up and down the streets, closed to all but pedestrian traffic.

Leslie Wallack, owner of popular local store The Book Nook was busy all day both inside and outside as customers dropped by to pick up a selection or two from some of their variety of literary offerings in the store.  In front of the store on this beautiful sunny day, local authors were there as part of Authors for Indies Day, raising awareness of the importance of Canada’s independent book stores.

Our book table was busy throughout the day with many friends and former school-mates and neighbours dropping by to say hello.

Nancy Hudson, cousin of talented band member Don White (of ‘Grateful We’re Not Dead’) stopped by to chat, and we briefly discussed the local musical acts including her nephew, appearing throughout the day at the Maple Festival.  There was a tremendous amount of talent featured up and down the streets of Perth for music-lovers of all ages.

Third Line friends and neighbours Trina McMillan Conboy and the bright and handsome Sawyer Conboy stopped by.  It’s always nice to see the folks from ‘the home soil’, and was delightful to hear young Sawyer discuss his newly acquired talent of driving the garden tractor.  A budding future farmer on the Christie Lake Road perhaps?

Former classmates Brenda Wark and her sister Norma came by for a quick visit.  We three were among the first group of students when Glen Tay Public School was a shiny new building. We shared many laughs and good times in those early days at Glen Tay.

Another former classmate Dianne Tysick Pinder-Moss stopped by with her husband Bob, and was nice to have a few minutes to catch up on the news.  Dianne and I go all the way back to our days in a little one-room school-house at Christie Lake.

Our lovely niece Tracey, visiting from Oshawa with her Mom and Dad, stopped by and we had a great visit.  Tracey and her folks were enjoying their first ever Festival of the Maples in Perth, and had many positive comments about the local treats they had sampled as well as the variety of local products and vendors available. 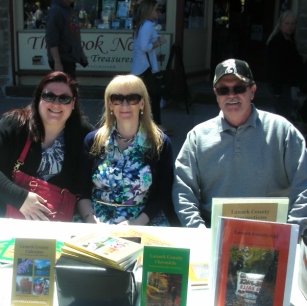 Former co-worker Cheryl Sheffer stopped by to say ‘Hello’ and chat for a bit.  It was so nice to meet Doug as well.  They were having a great day visiting all of the local vendors and taking in the sights and sounds of the busy festival. 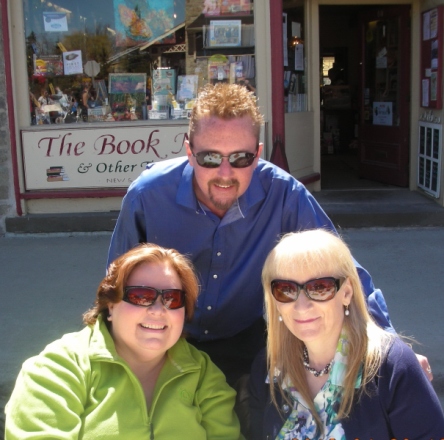 Another visiting author, seated to my left was James Bartleman, former Lieutenant Governor of Ontario, signing copies of his book.   Born in Orillia, Ontario, James moved to Perth after he retired, and now calls the ‘prettiest town in Ontario’ his home.

One of our local reporters stopped by.  She was busy working on stories for the next edition of ‘The Perth Courier’.  We had a great chat about one of the tales from my book “Lanark County Chronicles”  that features mobster Al Capone and his fascinating adventures along the Rideau Lakes.

Speaking of the Rideau Lakes, we had a nice visit with Rideau Ferry resident Carol-Ann McDougall and her lovely daughter Shannon who were enjoying some of the sights and sounds of the festival along Gore Street.

After a busy day at The Book Nook, another Festival of the Maples has come to an end.  The attendance set records, the weather was unusually sunny and warm for April, and event was a great success.  Thanks to all who stopped by to visit and say ‘Hello’, and special thanks to Leslie Wallack for hosting the event.   This Lanark County ‘kid’ had a wonderful time as always in the Maple Syrup Capital of Ontario!