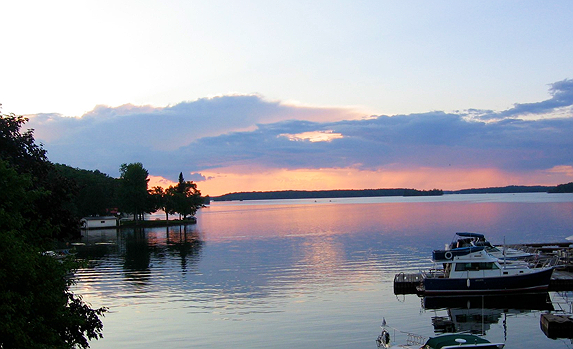 They were a couple of crazy kids from Kirkland Lake – outdoorsy-types, loved to ski and ride ski-doos, and most of all, they loved each other. After high school, they enrolled at Carleton U. , married in 1982, settled down in Orleans, and raised a couple of kids.

Fifteen years ago they went for a drive, and that was the first time they laid eyes on the Rideau Lakes. They’d never seen anything so blue, so peaceful, and so perfect. He looked at her and said, “This place feels like home.” And at that precise moment, they decided that someday they would build a house on that very spot.

At first, they bought a trailer, and a plot of land near the shoreline, and every season, without fail, they returned to the Big Rideau.

Their kids grew up, and they knew that it was time –  time to sell the house in the suburbs and build their dream along the water’s edge. The Big Rideau had been calling their names for years, and they were finally able to answer. 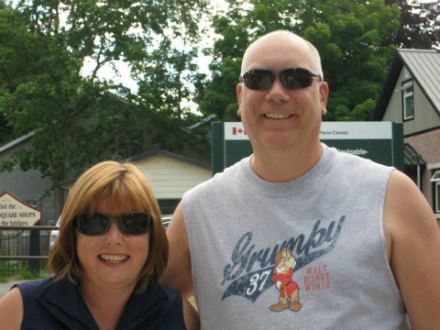 Mornings begin now with pink skies at sunrise, and waves gently lapping the shores. Evenings wind down to the sound of the loons as the sun dips low along the horizon and eventually disappears into the lake.

A bumper crop of apples, along with a perennial Perth Fair prize-winning recipe for Applesauce Loaf from “Recipes & Recollections”, filled their lake house with the warm scents of home baking.

Time is spent lovingly restoring a 1961 classic boat to her former glory, and day-trips to Perth or Brockville, along the scenic Rideau waterway.

You never know who might stop by for a visit in Rideau Ferry!

Pull up a chair on the deck, and soak up the warm summer sun…

Make some new friends at the annual Rock the Dock…

or dance the night away at the yearly corn roast, along the shores of the Big Rideau

Grab a cold drink, and sit outside at the fire pit.

Whether you feel like socializing, or would prefer a quiet evening listening to the sounds of the loons, there’s always something to do at the lake! 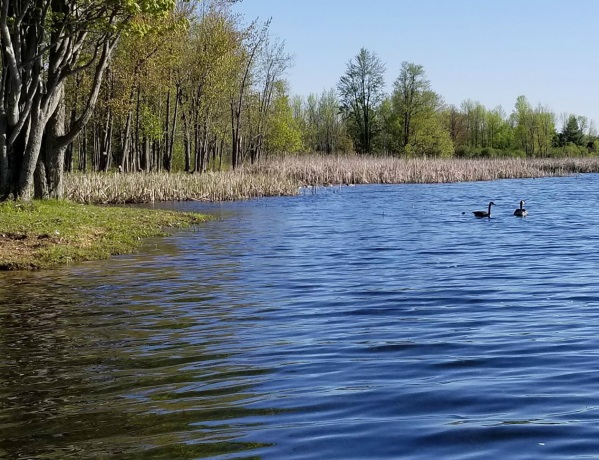 The beguiling charm of Rideau Ferry has been capturing the hearts of visitors and residents alike going back as far as the days of the pioneer settlers.

“One of the most notorious characters that passed his leisure time along the Rideau waterways was none other than Alphonse Gabriel “Al” Capone.  Al Capone was a mobster based out of Chicago, and he made his fortune as a bootlegger, during prohibition.

He is said to have been a frequent visitor to a grand home in Kemptville, that was once owned by John Harris.  Harris was a local who became a pharmacist, and worked in Chicago. 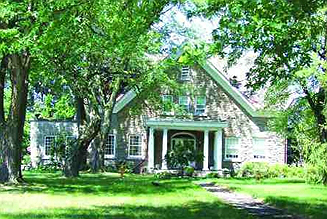 It has been suggested, that because of his background in chemistry and science, he was possibly cooking up quantities of moonshine in his home, and as you can imagine, this was of great interest to Capone.

In 1927 Harris built the beautiful, stone mansion that still stands today on Oxford Street in Kemptville.  Locals say that the house was built with a state of the art security system, and series of underground passages.  The grand home features leaded glass, a main switch to control all of the lights in the house, and a panic button wired directly to the local police station. It has yet to be confirmed that there are two tunnels leading from the house; one that links the home to the Kemptville Hotel, and the other which connects the house to the river.

Some of the stories have suggested that Capone himself hid a quarter of a million dollars, between the walls.  Whether fact or fiction, witnesses, some of them lifelong residents of Kemptville, who were around in the 1930s and 40s, claim they saw many long, black limousines and the infamous black Cadillac parked at the home.  Coincidentally or not, Harris sold the house, and moved away within a few weeks after Capone’s death.”

On a lighter note, one of the popular dancehalls of the 1950s – 70s was known as the Rideau Ferry Inn. It was built on the site of what was originally a family home known as ‘Coutts House’.

After 1905, the building was rented to a series of business men. During the 1920s and 30s regattas became popular and Coutts House held canoe races and rowboats races. They also sponsored events for sailboats and it was the site of many grand daytime celebrations and intimate evening affairs for the wealthy travelers visiting in the summer.

In 1947 Doug Wallace, native of Osgoode, bought Coutts House, tore it down, and built a new structure, with wood framing and grey granite blocks. It was a two storey building and the second floor featured a large dance area with seating on three sides.

By the 1960s the building had become known as the Rideau Ferry Inn, and during this time became licensed for liquor sales. Up until that time people smuggled in their own booze, particularly in the roaring twenties when rum-running along the Rideau had its hey-day.”

Whether you’re a visitor to the Rideau Lakes region, or living the ‘Lake Life’ like residents Ken and Carol-Ann McDougall, Rideau Ferry and its majestic, pristine waterways offers something for everyone.

With a rich history, and its striking beauty, the lakes are a wonderful place to pull up a chair and enjoy the view.

If you spend time around Rideau Ferry, you may hear these surnames that go back in the history of the area since the early days of the settlement:

Excerpts on Coutts House, and Al Capone’s heyday, taken from:

Recipe for the prize-winning Applesauce Loaf, may be found in –